First posted on 11 May 2012 on http://citythreepointzero.wordpress.com/

‘It is a wet afternoon in Glasgow, May 2062. The temperature is barely six degrees above freezing, the Clyde has burst its banks as is now customary for this time of year, and is lapping about the entrance to the old Central Station, now the R. D. Laing Cultural Exploratorium. The upper floors are a museum, the ground level a hydroponic research gardens. The red iron-rich waters lapping around the station’s baroque entrance have become one of the sights of the city.

The rain is incessant, but Glasgow is buoyant. The GI (how old-fashioned the acronym sounds now – as if ‘international’ still means something) has just opened, now well into its sixth decade. Its legendary founder, and now honorary President has just made an appearance at the show’s opening in a climate controlled inflatable. At 95, she is remarkably sprightly, and makes a point of attending each opening in person rather than as the more usual hologram. Alcohol has been banned by the Scottish Government, but on special occasions such as this one, a state of mild intoxication is permitted by the authorities. officials from the Diageo-run local government administer a ‘whisky patch’, a sticking plaster which if placed correctly on the arm administers a drug that briefly simulates the effect of a drink. For a few moments, everyone’s happy.

GI has in its six decades been an astonishing success. So much so the city has now entirely forgotten its industrial past. The only memory now is of a city of creative types, the dominant image of the place since 1990. Its surviving 19th century architecture only connotes ‘loft-ness’ now, and even that idea seems hopelessly quaint. Everyone is an artist of one kind or another, or involved in servicing the art business. It employs rather more than shipbuilding did in its heyday, not that there is any living memory of that. (The Riverside museum, designed by a long-forgotten architect Zaha Hadid, it was said, contained a collection of ship models, but no-one understood what they were, or how they had got there. The museum itself closed decades ago when it was discovered its livid green interior poisoned visitors) and abandoned like the entire Clyde estuary. Its University was long ago taken over by the School of Art and now has 40,000 students, mainly from central Asian oil states. 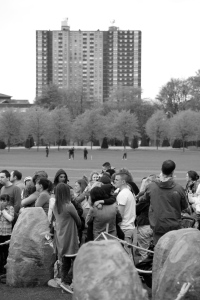 Where are the poor? Edinburgh, mainly, with a few hundred thousand transported to compounds in the intermediate city of Cumbernauld when it became the capital in 2030. A few remain to staff the popular Museum of the Welfare State in a preserved Gorbals high-rise, a few to the Gallery of the Poor at the old Barras market, but otherwise they’re gone. Glasgow has been taken over by Art.

This has had some odd consequences. With 1.2 million artists in one place you get an astonishingly high rate of coffee drinking (the highest rate of consumption in the world), the world’s highest rate of solo living, the greatest concentration of psychotherapists, the most single-speed bicycles (a revival of an early-21st century fad), the dissipation of almost any sense of collectivity, the world’s lowest birthrate. The children have mostly gone and the schools closed. The huge population increase has been achieved through in-migration, lately from the declining art capitals of Berlin, Beijing and Delhi (the migration from ruinously expensive Manhattan happened in the 2030s).

What of the art? There’s real nostalgia for 2012 in the profile of the bouncy castle. Then, as some of the more elderly visitors might recall, Jeremy Deller showed Sacrilege, a life-sized inflatable Stonehenge. That’s been reconstructed here at its original Glasgow Green site. But that piece, a one-liner, pales by comparison with the scale and ambition of the other works: the City Chambers, University and Kelvingrove replaced by convincing, life-size pneumatic versions ( in the case of City Chambers, fully functional too). Meanwhile, Buchanan St has been lined in latex rubber, and most spectacularly of all, the long-defunct Glasgow subway remade, life-size, as a helium balloon. The largest inflatable constructed in history, the size of two dozen Hindenburgs, it floats, implausibly, at an altitude of 300ft, aerially marking the subway’s route. At a smaller scale, Glasgow’s prowess in inflatables is represented by the 1,000 or students on GSA’s MSc in Pneumatic Studies. Their work is everywhere- it’s impossible to move without bouncing. Meanwhile elsewhere in further nods to 2012, Sauchiehall St has become a temporary museum of cake art, while in the ruins of the old Symphony Hall, the SSO has been replaced by a full sized robotic version, which visitors can ‘play’. 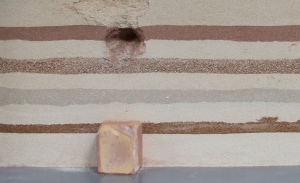 It’s a strange place, this new Glasgow. I stop off near Barras Museum to buy some cuttlefish sashimi from a man dressed as a penguin. He is that rare thing these days, a Glaswegian. What does he think of it all? Well, there’s plenty of money about, he says, glancing over at a gang of North Korean artists dressed as ‘normals’ (a new fad – creative types pretending to be insurance clerks, noisily affecting artlessness). ‘We’re richer than we’ve ever been.’ ‘But they’ – and he looks over at the artists again – ‘just treat us a background. We’re just for decoration these days.’ ‘And that – he looks up at the six-mile inflatable subway, hovering improbably above our heads – ‘I just don’t know, I really don’t…’ As he speaks, an electric biplane take another gaggle of tourists on a loop-the-loop around this floating leviathan. How can they top this?