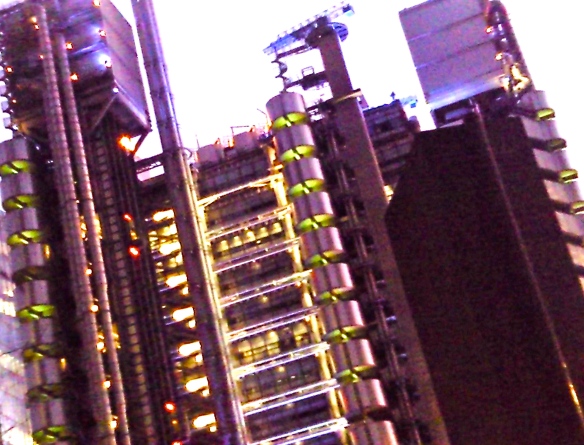 The idea of ‘civility’ crops up a lot at Richard Rogers’s exhibition. It’s there right from the start in a room decked out in orange vinyl, with a series of panels laying out Rogers’s ‘ethos’. In practice, it’s most clearly represented in Rogers’s non-architectural work, such as his chairmanship of the New Labour government’s Urban Task Force (1999), his work as London’s architecture ‘tsar’ for then Mayor, Ken Livingstone, his Reith lectures for the BBC, and his books. Cities for a Small Planet (1997) is the best known of those, and it has been good business for both Rogers and Faber and Faber. All of this work pushes a beguilingly simple message: we should all stop being beastly to each other, beastly to the planet, and learn to live in cities. Until then, we are doomed. Good behaviour and armageddon are entwined: do right, and we live, he seems to suggest; misbehave and we all die. It would be an abominably Victorian message if it wasn’t delivered with such urbanity. But Rogers is charm personified, and he somehow not only gets away with it, but has got the rest of us to believe him.

In practice Rogers thinks that civility can be built. His birthplace, Florence is civil, as is Barcelona and most of Paris, as increasingly, he thinks, is London, or at least those bits which have been remade according to his preferences. More generally, coffee drinking encourages civility – here he sounds positively eighteenth century – and as if to prove it, the last room of the exhibition has a cycle-powered coffee cart from which you can purchase a latte and reflect on city life.

It’s a measure of Rogers’s success that all of this now seems so normal. In 1986, when he exhibited at the RA, his ideas (pedestrianise Trafalgar Sqaure, civilise the Embankment, make spaces for people) were rather exotic. The government of the day wasn’t interested. Twenty five years later, almost all of what he then wanted has been achieved, if rarely by Rogers himself. Moreover, London has grown hugely, adding almost two million residents, with no end in sight to its growth. Not only that, but these residents have come, by and large, to the inner city. The balance of power has shifted to the city from the suburb. Its new residents aspire, for the time being, to a city life.

The odd thing is how little Rogers’s built work expresses civility. His best buildings are really profoundly uncivil. The Centre Georges Pompidou (1977) involved the wholesale demolition of a city block, and the insertion of a building alien to anything in Paris – indeed the world – at the time. The Lloyds Building (1985) repeated the same trick in London. Both buildings celebrated the temporary and emphemeral in contexts that more or less demanded the opposite; both showed indifference verging on hostility to their surroundings; both look (like the imaginary works of Archigram that informed them) like they might just rise up on pneumatic stalks and move on, once they’d exhausted their local resources. The aesthetic has been toned down of late. But the latest building, the skyscraper at Leadenhall St in the City, has acquired a suggestive nickname, ‘the Cheesegrater’. It refers to its triangular outward form of the building, of course, but it also describes an abrasive tool made to shred things that get close.

I like this incivil character in Rogers, and there are plenty of examples of it at the RA exhibition. The Pompidou and Lloyds are fantastic buildings precisely because they don’t appear to give a damn about their surroundings, or indeed anything. I like them in exactly the same way I like J. G. Ballard, or early Hawkwind, or Blade Runner: they’re cheerfully amoral, rolling in the ruins of the apocalyptic present. They trash humanism, or so it seems.

The contradiction between Rogers’s buildings, and his rhetoric has never been properly explained. He and his advocates have tried by claiming civility for the early buildings. That’s why the Pompidou is more often these days described as an extension of the (civilised) Place Pompidou, rather than a soixante-huitard’s attack on the bourgeois city.

However, perhaps the contradiction isn’t what it seems, however. Civility tends to be expressed from a place of privilege, and in this, Rogers is no exception. The imagination of civility – of which there is copious evidence at the RA – is a life of leisure: drinking, eating and talking in beautiful city spaces. Nobody does a scrap of work. The now iconic image of Trafalgar Square from ‘London as it Could Be’ (1986 – actually a drawing by Rogers’s long-time associate Mike Davies) imagines this key public space as a de facto sculpture gallery, populated by people who have just spilled out of the National. The art museum and the public space are coterminous. Nothing wrong with that – except that this mode of being in public, the leisured promenade is the only way Rogers and his friends can imagine public life. Civility equals politeness here; it’s manners sublimated to morality. And it really helps if you’ve got plenty of cash. Rogers’s client base is rarely the ‘public’ of which he likes to speak. More often than not it’s the corporate financial sector, or the super rich, the business traveller. The Welsh Assembly in Cardiff is a rare exception.

Leaving the RA and heading north, it was striking how much Mayfair seemed to embody Rogers’s notion of civility. Its urbanity, cosmopolitanism, and sense of ease seemed to embody everything Rogers meant by civility. But it is also the most expensive neighbourhood in the known universe. Very few of us can afford to spend any time there, let alone think of calling it our own. And its civility is supported by a vast labouring army, who – like the coffee-vendor in the gallery – contribute to the spectacle, without being able to enjoy it. For those reasons, civility to me often connotes cruelty, albeit of a hidden kind. At best it’s bullshit, and I think it ultimately diminishes Rogers’s work. Architecture, like all the arts, is fundamentally amoral. If you’re going claim otherwise, you better have a pretty strong claim. This ain’t it.

Richard Rogers RA Inside Out is at the Royal Academy, London, until 18 October 2013. For more on Rogers and civility, see my book The Anxious City (London: Routledge, 2004)