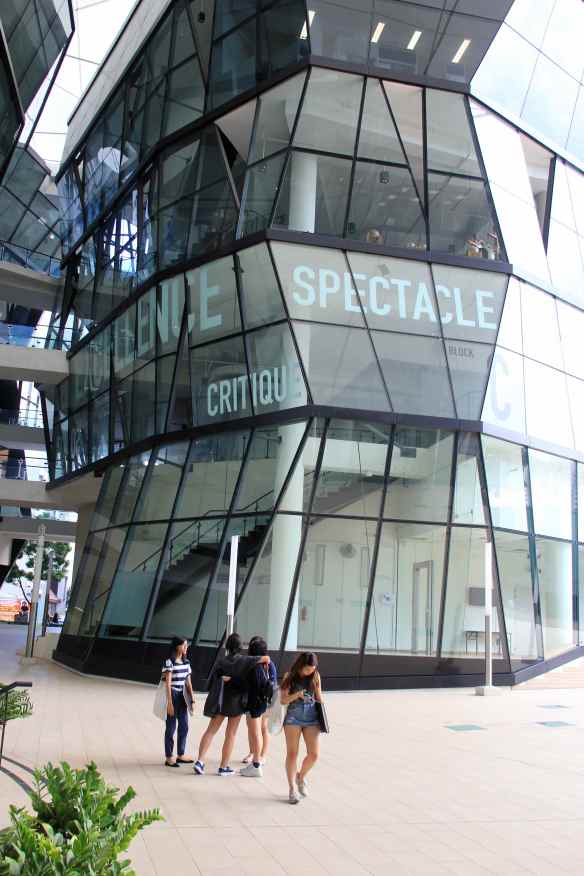 What you’re looking at is one of the towers of Lasalle College, a small private art school in central Singapore. Built in 2007 to a design by RSP, it was extensively funded by the Singaporean government who have been enthusiastic promotors of all things ‘creative’ since the early 2000s. Of all the things I saw in Singapore last week, this was perhaps the most thought-provoking, less for the architecture (which is undeniably spectacular) than for the attitude that it embodies. It makes a simple deal: accept that the arts are in the service of the national project, and they will be funded with an inconceivable generosity.

The deal is legible enough in the window vinyls, the words ‘excellence’, ‘spectacle’ and ‘critique’ screaming out the message. For many UK humanities academics, this kind of of sloganising is simply grotesque: aren’t these words supposed to be a means of interrogating the very things they seem here to support? You can picture a generation of cultural studies scholars with their heads in their hands.

That reaction, to my mind, would miss the subtlety of the deal. Of course ‘spectacle’ and ‘critique’ and all those other words shouldn’t be turned into mere decoration. But I doubt those words are really much more than decoration in any of the work we might do in the west, the business of naming being, after all, a form of commodification (and where would critical theory be without all those publishers making a business from it?). Lasalle abruptly challenges that myth. To believe in the myth, you have to cling onto the comforting idea the arts can be somehow stand ‘outside’ society too, a zone of freedom beyond the reach of government.

That freedom would be nice were it real, but my twitter feed during the period I was away suggested that my world was in fact a narrow and censorious one. Too often last week, my academic freedom seemed to be the freedom to agree with a majority view.

Lasalle’s windows inadvertently say the unsayable: our freedom is conditional on complicity. It’s discomforting for westerners, but in Singapore’s case, for 50 years, the government has been adept at meeting its part of the deal, remarkably so. It houses and feeds its citizens better than any European country I can think of (certainly Scotland, whose record on both is scandalously awful). Of course, Singapore’s wheels may well be coming off, as two NUS academics, Donald Low and Sudhir Vadaketh, have argued in an excellent new book. But for the time being, Singapore remains a compelling, if troubling example.