Things have been quiet lately on this site partly because I’ve been doing THE MUSUEM OF EVERYTHING. http://sites.ace.ed.ac.uk/museumofeverything/ The site’s first post is reproduced below. Check in daily for updates. The project ends officially on 21 February, but if there’s any demand, we’ll keep the web page going. 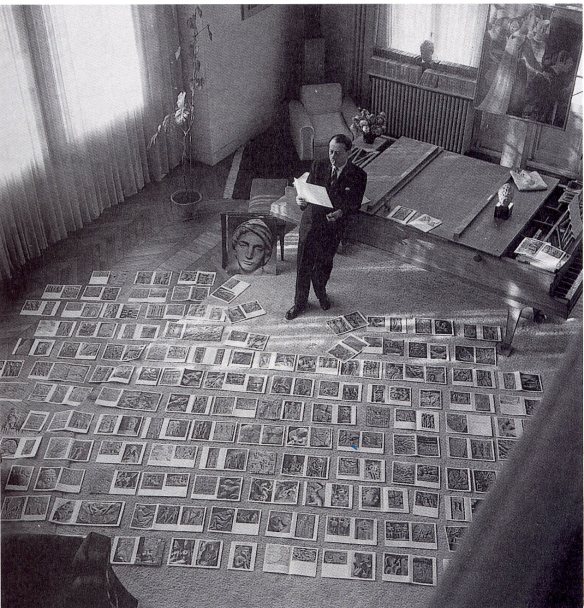 THE MUSEUM OF EVERYTHING is an imaginary museum created by its visitors over a five day period from 17 to 21 February 2014. It takes place in a big, airy room in Minto House normally used for architecture studio crits. On entering, you’ll see a sign setting out INSTRUCTIONS FOR OPERATION. It’s really very simple. You take a 8″ by 5″ file card from a box and on it you write, or draw, or otherwise  describe any object you would like to see in the Museum. Anything at all is allowed. It could be an art object – Picasso’s ‘Demoiselles d’Avignon’ (1907) for example, which we can temporarily borrow from the Museum of Modern Art in New York. It could be a scientific object, like an early microscope or the Large Hadron Collider. It could be an early Koran. Or the Titanic, raised from its watery grave. A live Giant Pacific Octopus. A set of chopsticks. It really is up to you. If the object is small enough, and you’re happy to let us have it, then stick it to the card. Once you’ve filled out the card, pin it to the wall along with the others, and then repeat the process as often as you like. The aim is to fill the Museum – generosity is positively encouraged. Maybe we can help create a new generation of cultural philanthropists, if only in our minds. At the end of the week, on Friday 21 February at 1300 there will be panel discussion involving Prof. Andrew Patrizio, Dr. Jill Burke, Dr. Carol Richardson and Dr. Frances Fowle of the School of  History of Art at which we’ll discuss what kind of a collection we seem to have created, and what we should do with it. Robust – even iconoclastic – discussion will be encouraged.

THE MUSEUM OF EVERYTHING has scope for a lot of fun. But it is also a serious exercise at a time when museums are so circumscribed by politics, the law, health and safety, the demands of lenders and the demands of insurance companies, the lunacy of the art market, and the competition for audience. With so many competing demands, it’s a wonder museums exist at all. What is certain is that we rarely have an open discussion about them and what we want from them, as we – in this case art historians – are also so often in the position of the Museum’s advocates. The Museum of Everything is, hopefully, a pause in normal business, and a chance to reflect.

The Museum draws on a few historical precedents. The idea that anything might be included comes from the eighteenth century tradition of the Cabinet of Curiosities, an idea that increasingly appears in academic discourse in a cloud of something like nostalgia. The Cabinet’s fundamentally anti-rational character is the very opposite of the present day museum – it has something we’ve undoubtedly lost. The Museum of Everything also draws in a wonderful and eccentric book by Andre Malraux, the Museum Without Walls, published 1952-4. In a classic image from that book, Malraux is pictured looking a carpet of photographs of sculpture – the medium of photography, he argues, gives us the possibility of experiencing art in all kinds of new ways and in new combinations. No longer are we bound to a fixed architectural container. Malraux’s argument of course prefigured the invention of the world wide web, which has informed contemporary museum practice in ways we are only slowly starting to understand. Cognisance of that has to be part of our building a Museum of Everything, too. Finally, there have been one or two Museums of Everything in the past, including a London-based art project with the odd iteration on the South Bank. This is unrelated, not least because it’s an audience, not artist-led project. But we like the name, so we’re sticking with it. If anyone objects, let us know.

So – you’re all welcome to the Museum, very welcome indeed. Visit anytime 0930-1700 and add as much as you like. And please, if you can, come to the events during the week, and help us decide what to do with our creation.

1 thought on “The Museum of Everything”